This spring I told you about some yummy tater-tot-like education reform laws passing in Idaho. Seriously. Well, now Jessie Bonner of the Associated Press reports that one of the key reforms is coming to life throughout the Gem State:

A database compiled by the state Department of Education shows schools districts have adopted a mixture of criteria, giving teachers points for everything from student attendance to graduation rates and writing assessments.

The result: A laboratory of pay-for-performance methods in a state that has long debated whether teacher pay should be tied to things like student test scores.

At least 29 school districts statewide have since developed merit pay plans based, at least partly, on parental involvement.

Twenty-nine school districts: An impressive number. But how effective will the reform laboratory be? All in all, it sounds like a report published earlier this year by my Education Policy Center friends, a look at local Colorado K-12 educator pay innovations titled Pioneering Teacher Compensation Reform. There aren’t 29 districts in our state moving the ball on this issue yet, mainly because there was no state law like in Idaho to activate them. But my guess is the deep and thoughtful work districts like Harrison 2 and Eagle County have done could be a guide for our friends in the Northwest.

An interesting aspect not touched on a lot in my friend’s report or in the two districts I cited, the emphasis in the AP story is on Idaho’s requirement that plans factor in teachers’ engagement with parents. No doubt an important factor in improving learning, but one that can be difficult to measure the quality and effectiveness to use in a pay system. Still, you have to credit Idaho for trying.

The Challis School District’s idea of requiring teachers to initiate at least two contacts with parents every three months seems like an eminently reasonable policy, one that some teachers surely already exceed. On the other hand, Gooding’s plan of counting parent attendance at three school conferences for 25 percent of teacher bonuses seems like it could have some unintended consequences — depending on what sort of safeguards are built in. But maybe these are just the sort of answers the reform laboratory will end up sharing. 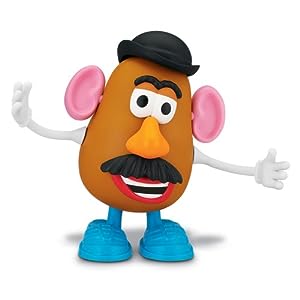 So I kind of gave up on my original thought about sharing a spooky education story with you on Halloween. But thinking about Idaho education reform and yummy tater tots has given me another thought. Maybe I could dump my Buzz Lightyear costume for another Toy Story 3 character: Mr. Potato Head. Nah. Better yet, maybe I could get my mom or dad to wear a Potato Head costume when we go out for candy tonight. It’s probably too late, but it would be fun….