School’s Out for the Summer, But…

I just got a call from my alma mater, the University of Colorado, asking for a contribution. After I explained that I would never give money to a school that indoctrinates young minds in woke socialism, I went on a short and polite rant on what would have to change for me to give them money. She then asked if I would like her to remove me from their list. I said absolutely not. I look forward to these yearly chats.

Rob Natelson, our Senior Fellow in Constitutional Jurisprudence, worked part-time in universities for six years and full-time for 25. In “University Toxicity: America Should Stop Nursing the Viper,” he explains why you should not donate to colleges or universities. Your money will be much better used by organizations that work for, not against, your values. Independence Institute comes to mind.

In another article, he discusses the Supreme Court’s ‘American Hospital’ case and what it tells us about the D.C. swamp.

In addition to these publications for the popular market, Rob is writing a new scholarly article on the Constitution’s rules pertaining to federal relations with the Indian tribes.

At the June Colorado State Board of Education meeting, Pam Benigno, Director of our Education Policy Center, addressed the Board. She thanked them and their staff for their noticeable efforts to ensure that the public’s voice was heard regarding Colorado’s proposed social studies standards. You might remember that Pam sounded an alarm about the extreme woke-ism of the first draft of the proposed new standards. The public input Pam helped incite made a world of difference and the current draft in front of the Board is much more balanced.

Now it’s up to the Colorado State Board of Education to decide on the final product. To end her remarks, Pam encouraged the Board, controlled by Democrats, to exercise the “art of compromise” and to remember that their constituency holds diverse opinions about the standards. The State Board still needs to hear from you, so please contact Pam for more information.

On the topic of social studies, Independence Institute has endorsed the National Association of Scholars’ new social studies standards: American Birthright: The Civic Alliance’s Model K-12 Social Studies Standards. Supporting materials can be found on the American Birthright website. Written by liberty-minded experts, I encourage everyone to share this set of standards with your local school district board members.

One of our partner organizations, The LIBRE Institute, recently hosted a successful school and family resource fair. Pam and some of our interns helped with the event. Families learned about our SchoolChoiceforKids.org website, received a Pocket Constitution and videos about our founding documents and the three branches of government. The most popular giveaway was a video of Martin Luther King Jr.’s “I Have a Dream” speech.

Policy Analyst Jake Fogleman joined KOA radio’s Colorado’s Morning News with Marty Lenz to discuss the Supreme Court’s ruling in West Virginia v. EPA on the final day of the term. The ruling has major implications for the EPA’s ability to regulate power plants and how much deference unelected administrative agencies, in general, are given to make the law.

The Fiscal Policy Center has stayed busy for weeks conducting a thorough analysis of every bill passed during the 2022 legislative session that had any fiscal impact—nearly 400 bills in total.

Contrary to last year when the same legislators increased taxes and fees by some $700 million without voter consent, they remained relatively tame on that front. That’s no surprise during an election year, but there were still some doozies.

Senate Bill 22-234 addressed the one-billion-dollar deficit against the state’s Unemployment Insurance Trust Fund incurred during the pandemic. This includes some $70 million in fraud payments in the first year alone (don’t worry, a state task force has identified a whopping 17 fraud cases totaling a mere $300,000 and referred them for prosecution). When Colorado Democrats announced the bill (which entirely neglected to put more resources into addressing the fraud), they issued a press release stating, “Lawmakers Announce Bipartisan Bill to Save Businesses Money, Improve Unemployment Insurance for Colorado Workers.” Surprise, surprise—they lied.

When the pandemic hit, Colorado’s Unemployment Insurance Trust fund went insolvent by the summer of 2020. To continue meeting its obligations, the fund began borrowing from the Federal Unemployment Account—money which Colorado must repay with interest. By the start of session this year, Colorado had racked up over one billion dollars in FUA debt. If not paid back by January 2023, continuing to carry the debt “will increase the effective FUTA rate paid by employers in Colorado beginning January 2023, from 0.6 percent to 0.9 percent of the first $7,000 of wages per employee per year,” the bill’s fiscal note explains. It adds, “The effective FUTA rate will increase an additional 0.3 percent each year until the loan is repaid.”

Do you know the common axiom, “When you’re in a hole the first thing to do is stop digging?” They kept digging. During the pandemic, the state expanded UI benefits, temporarily increasing partial unemployment benefits. Legislators made that increase permanent, increasing UI Trust Fund obligations. They repealed the standing requirement for an individual to wait at least one week before becoming eligible for unemployment compensation. And to add insult to injury, they designated $15 million from the already-insolvent UI Trust Fund to extend unemployment benefits to illegal aliens.

The moral of the story—when politicians tell you something, the opposite is probably true.

Speaking of our Fiscal Policy Center, Director Ben Murrey sat down with me recently to discuss some of the ways Colorado’s legislature has cost Coloradans money. 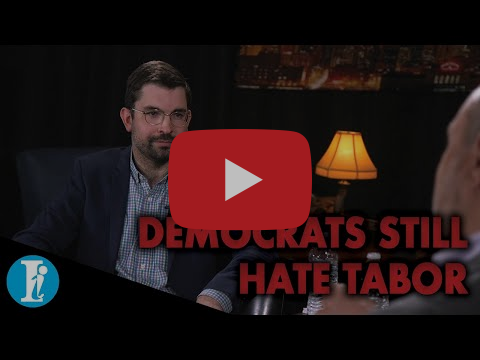 Please join us on Tuesday, July 19th at 6:30pm at the Castle Pines Library and learn about school safety solutions that we can enact today.

Are small businesses owners ready for the new Family Leave payroll tax and mandates starting next year? Most have no idea what’s going to hit them. We want to help.

We are teaming with NFIB in Colorado to present a FREE seminar for businesses and impacted non-profits to explain the nuts and bolts of compliance.

The seminar will take place at the offices of Independence Institute on Friday, July 22nd at 9:00am.

It is free to attend, but please RSVP HERE.