Hey, your 2021 legislative tax bill comes in at…

Breaking news – Under a new Colorado law, gas stations will now be collecting hundreds of millions of dollars for the state government in new taxes. But mercifully, the legislature will still allow them to sell gas on the side.

So, the promise of our Taxpayer’s Bill of Rights (TABOR) is to get voter consent BEFORE the legislature raises your taxes. So, just how much did the legislature tax us without our consent this year?

Fiscal Policy Director Ben Murrey and his team added it up and the answer is… over $600 million.

Please take a moment to wrap your head around that. Between so-called “fees” and policy changes, Coloradans will be coughing up over $600 million a year more to the Polis administration. For context, the flat-income tax rate cut we at Independence Institute passed last year saves taxpayers about $160 million a year, and we had to fight to get it on the ballot and ask voters.

Without asking your permission this arrogant legislature took your tax cut back, plus nearly three times more.

Read both Ben’s research and his column about this.

Governor Polis promised to enact revenue neutral tax reform by “broadening the base” and lowering the income tax. To keep the pledge he must lower our income tax rate from the current 4.55% to about 4.25%.

Let’s hold him to it!

Pam Benigno, Director of Independence Institute’s Education Policy Center, will be a panelist with the Center for Education Reform’s Action Series, talking about the future for state policy makers after the landmark Espinoza vs. Montana Department of Revenue case!

We hope you will tune in as Pam and her fellow panelists break down how this ruling affects you and your family’s rights in education. 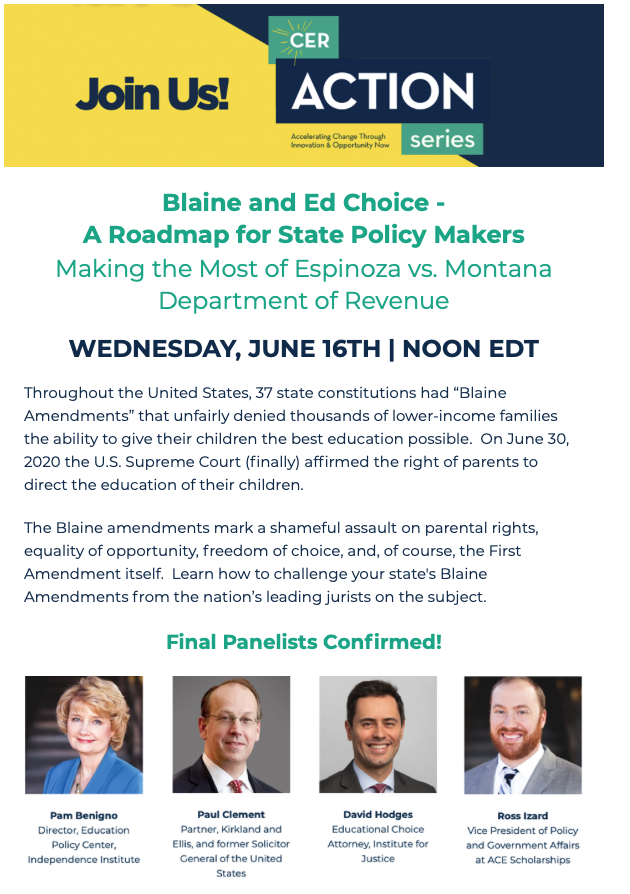 To RSVP for the event, click here. We hope to see you there!