You’ve heard me babble on about my daughter, Piper, who I fear is more conservative than I.

I fall on the libertarian side of the fence, she falls on the conservative side of the fence. And then, well, she plans to turn the fence into a big, beautiful wall that I am to pay for. And why not? She gets me to pay for everything else, including a dog I never wanted (really, read my latest column on how she got the dog).

As conservative, hawkish, and law-and-order-ish as she is (as a kid she said, “I can’t wait to grow up and live in an HOA community. I’m tired of seeing that car parked in the street.” What freak kid says this?), she has no memory of the Cold War. Neither does any kid in her college.

What a disservice we have done this generation by not teaching them why America fought and won the Cold War. Woke-ism they learned. Environmental socialism they learned. How truly evil the command-and-control state is, well, not so much.

Even Piper, well steeped in foreign affairs, didn’t really get what Russia was. She knew they weren’t to be trusted, but never saw Putin as a world threat. Our conversations are incredible on this topic, but we should have had more of them years earlier.

As images pour out of Ukraine, this generation is getting a crash course in the real world and the horrors of tyranny. And that is the only positive I see coming out of this sad situation.

I’m watching videos of the Ukrainian government giving guns to civilians in a desperate hope to defend their sovereignty. And at the same time, I’m watching cities, like my own Boulder, working on new proposals to disarm civilians. Our work is necessary.

Our own Dave Kopel is back in the U.S. Supreme Court. Last week, he filed an amicus brief urging the Court to grant certiorari and hear a case challenging Maryland’s ban on some semiautomatic rifles. According to Dave’s brief, the ban on modern sporting rifles, such as those of the AR platform, is contrary to American historical tradition. In fact, the most common guns when the Second Amendment was ratified were all-in-one hybrid long guns that were used for hunting, personal defense, and militia service.

Their modern descendants, the modern sporting rifles, are protected by the Second Amendment. Kopel also argues that lower federal court decisions upholding bans on modern sporting rifles are illogical and self-contradicting. Joining the Independence Institute amicus brief were the Cato Institute, the Center to Keep and Bear Arms (a project of the Mountain States Legal Foundation), North Carolina’s John Locke Foundation (led by former II executive vice president Amy Cooke), and leading law professors of the Second Amendment. The Court will likely announce its decision on whether to take the case in May or June.

Tune in tonight for Devil’s Advocate at 8:30pm on PBS12 to meet the Superior town trustee who’s fighting for the Marshall Fire victims. Guess who wants them to pay a whole lot more to rebuild their homes? Our “affordability” governor, Jared Polis. The interview will be also be posted to our YouTube channel, IITV, early next week. This is a must-watch.

And in the interview below, our Fiscal Policy Center Director Ben Murrey sat down with me to talk about all the money Democrats have cost Coloradans in the past year, despite their new appreciation for “affordability.” 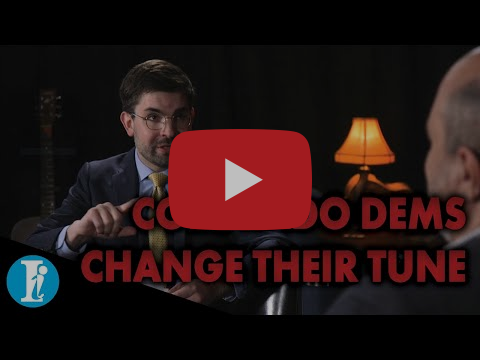 Here at Independence Institute, we do not shy away from joining with groups on the Left to support fundamental constitutional rights. Recently, I was approached by a coalition of First Amendment groups on the Left seeking our help. So we joined an amicus brief to the Colorado Supreme Court in a case supporting the right of an attorney for a plaintiff to communicate with the media without fear of financial exposure by a damages action filed by the defendant. The Court of Appeals case is BKP, Inc. v. Killmer, Lane & Newman, LLP, 2021 COA 144, 1 (Colo. App. 2021).

The informal coalition knew that they needed a conservative voice to help convince the Court on the importance of the merits. We agreed. Independence Institute joined with the Colorado Broadcaster’s Association, the Cross-Disability Coalition, the Colorado Trial Lawyers’ Association, and others.

Independence’s attorneys routinely comment to the media on gun cases and other litigation focused on fundamental constitutional rights. We have a duty to educate the public, elected officials, and others about these important issues. To muzzle lawyers, even progressive ones, would work to hide the facts of important cases.

In a Forbes column, Patrick Gleason from Americans for Tax Reform highlighted our efforts to reduce the income tax:
“[T]he free market think tank in Governor Polis’s state, the Independence Institute, has released a plan that would get Colorado to the 0% income tax rate that Polis says is optimal. The Independence Institute is proposing to take the state’s Taxpayer’s Bill of Rights (TABOR) and turn it into a mechanism to facilitate the gradual phaseout of the state income tax…”

It’s been a busy week for Complete Colorado. Here’s a rundown of can’t miss original reporting and commentary:

Columnist Rose Pugliese describes how some in the legislature are trying their best to short-shrift a promise of ‘just-transition’ to Colorado coal communities sacrificed at the altar of green energy.

Columnist Mike Rosen explains how the Douglas County teacher union is once again laying siege to the school district.

Contributor Joshua Sharf tells the tragic tale of Colorado’s Department of Transportation being turned into a statewide urban planning department.

I make the seemingly reasonable point that parents ought to be able to see and hear what their kids are being taught.

Finally, reporter Sherrie Peif blows the whistle on the Boulder County Community Foundation hoarding many of the millions raised on behalf of Marshall Fire victims.